Tap into the power of AoIP with Axia Quasar, our sixth-generation of AoIP consoles and the industry-standard in mixing excellence. Powered by mature and sophisticated AoIP technology from Telos Alliance—the inventor of AoIP for broadcast—Quasar is designed for steadfast reliability with no single point of failure. 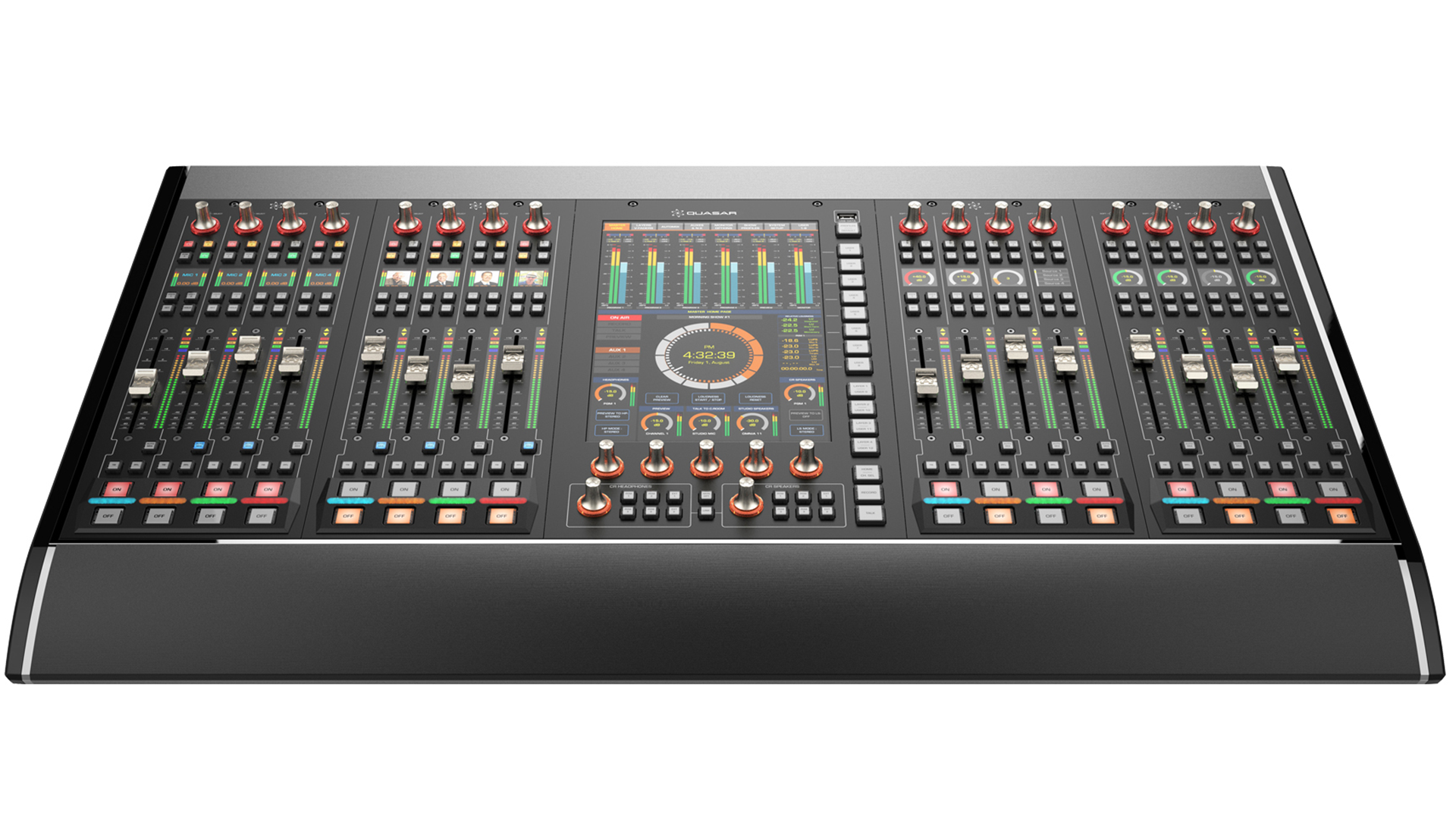 Quasar XR is our top-of-the-line mixer featuring extensive metering built into the surface right where it needs to be—on every channel display and next to each fader, as well as on the monitor module. These LED meters allow users to live mix rather than merely confidence monitor, giving users active control over their environments for the best possible outcome.

Quasar XR offers Quasar Soft and Quasar Cast remote control and monitoring solutions, delivers full integration with Telos Infinity® IP Intercom products, and adds support for new Quasar Accessory Modules, along with numerous other powerful features. This advanced scalability addresses new workflows, like Work from Home, and gives broadcasters more flexibility when it comes to the number of channels they need in their Quasar Engine, starting at 16 channels and scaling up in blocks of 16 channels up to 64 channels. 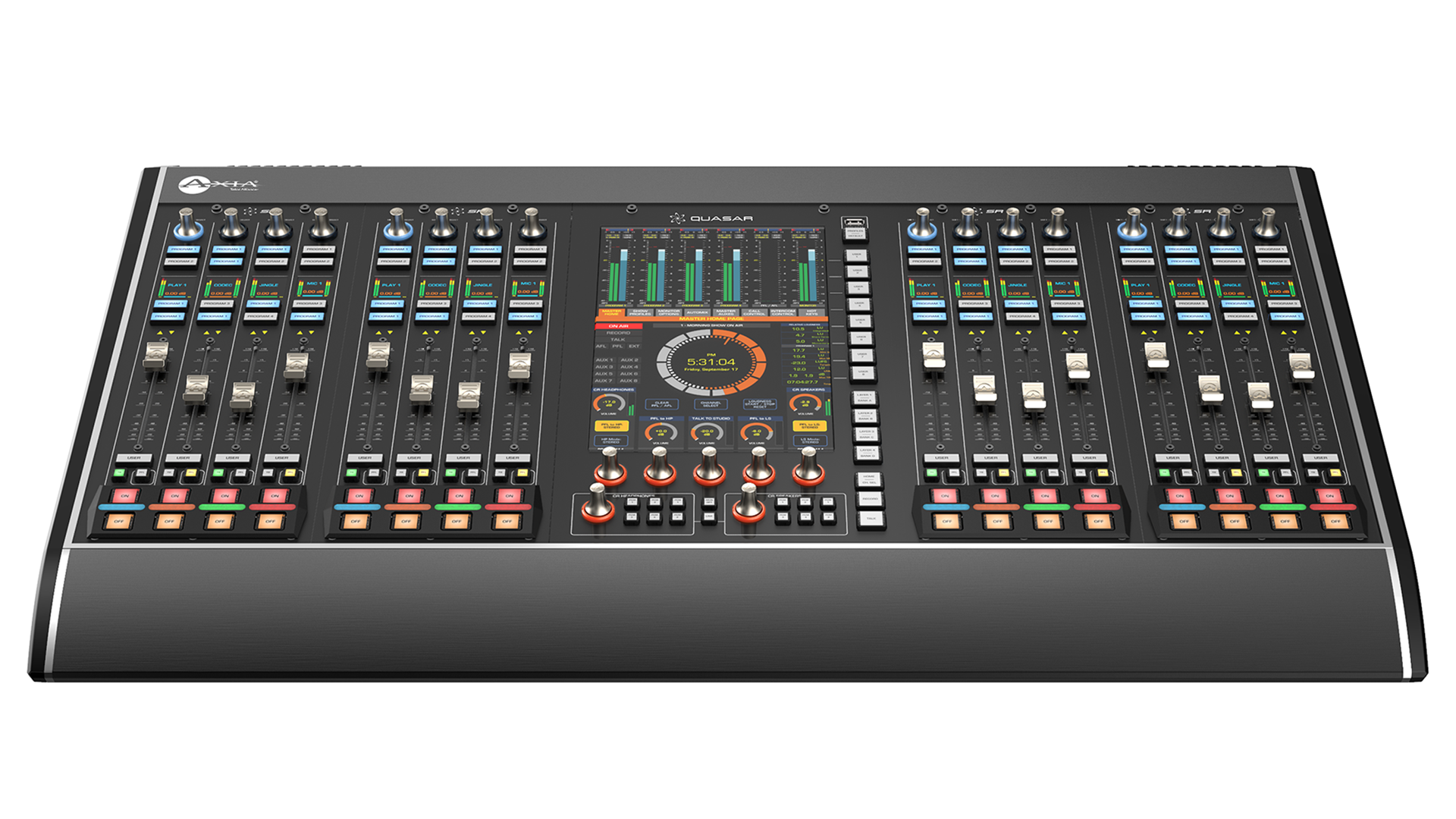 If you like Fusion, you’ll love Quasar SR—which is comparable to the Fusion console in both price and feature set but also delivers all the power, ergonomics, industrial design, and star appeal of our flagship Quasar XR console. Quasar SR is not reserved for the most knowledgeable broadcaster but is approachable to any board operator thanks to its streamlined surface design. Quasar SR fader modules are non-motorized, there are fewer, larger, and easier-to-reach buttons on each channel strip, and features confidence class metering. 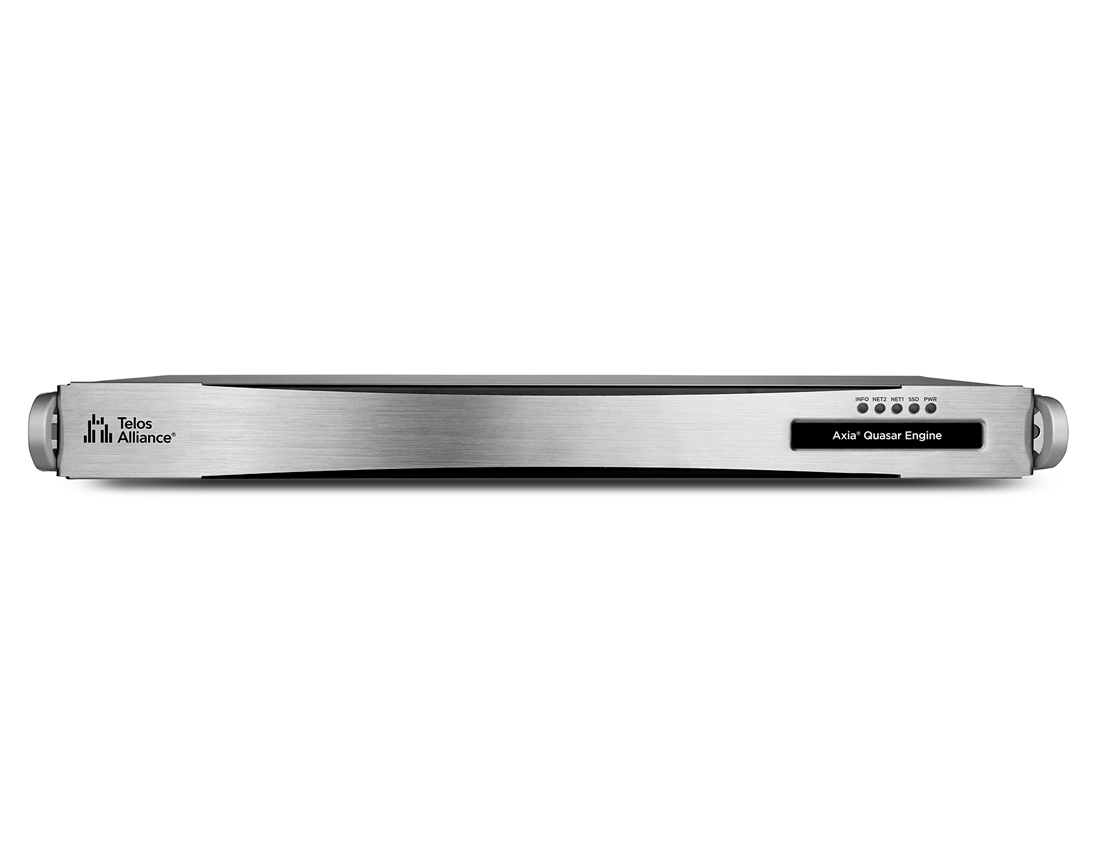 The Quasar Engine provides bulletproof mixing console signal processing for Quasar surfaces and is a must-have for the operation of your XR or SR surface. Allowing you to pay only for the number of channels you need, the Quasar Engine is modular, starting at 16 channels and scaling up in blocks of 16 channels. 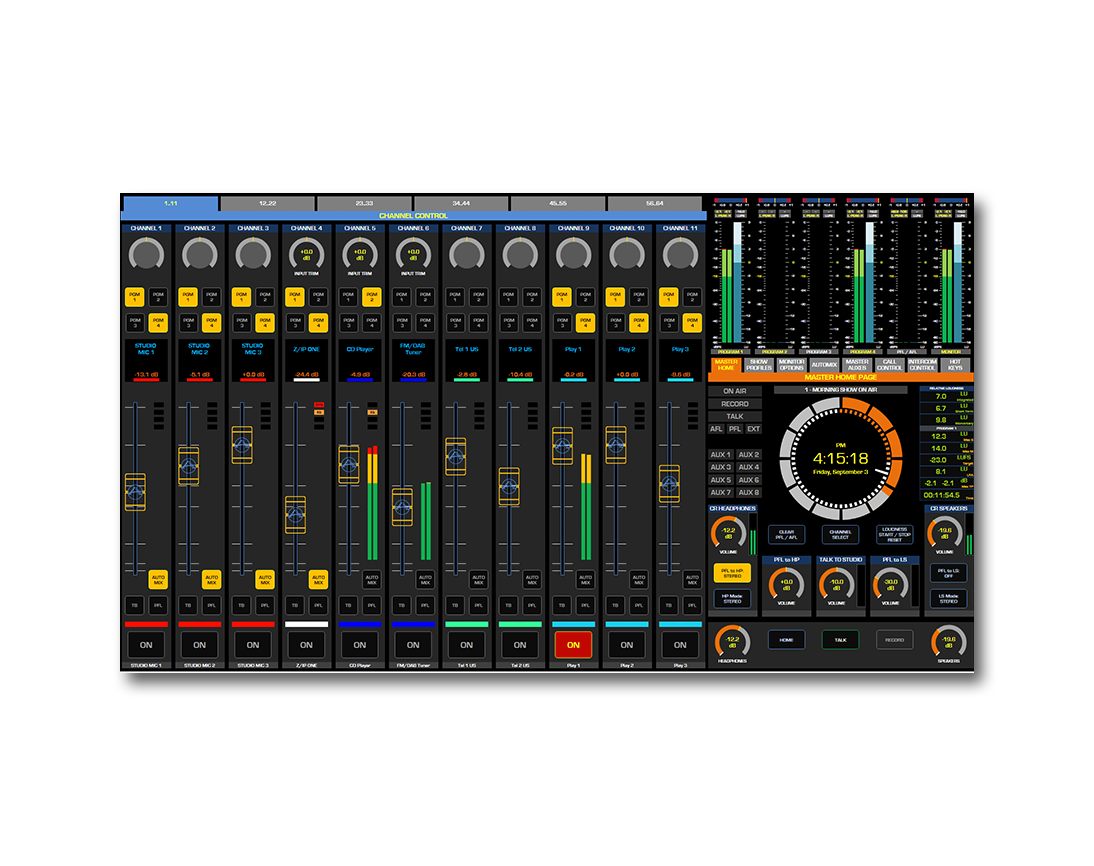 Our customizable remote solution lets you control your Quasar surface from a web browser. Quasar Soft comes standard with Quasar XR consoles and is an optional upgrade for Quasar SR consoles. Included as part of the license, Quasar Cast is a remote monitoring solution that lets you listen to any Livewire stream in the network.

The Mic/Headphone Control Module provides remote control of mic on/off functions where dedicated Mute and Talkback buttons give talent full control of their position. A Volume/Source selection knob allows users to select their headphone monitor source and the display readout confirms their choice. 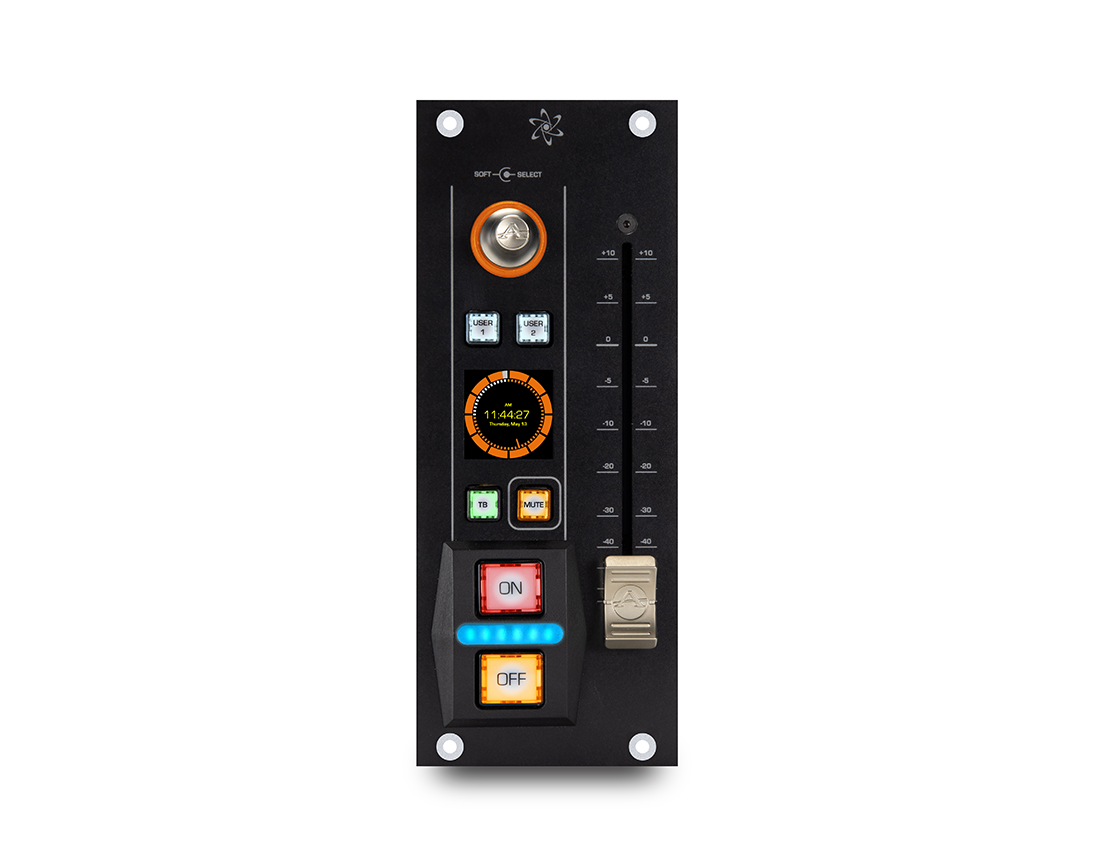 Quasar's Motorized Accessory Module provides all of the functionality of the Mic/Headphone Module with the addition of a high-quality motorized fader that allows control of any of the Quasar Mic channels. With the features included, this module can effectively function as an additional channel strip for your surface, mountable in a remote location. 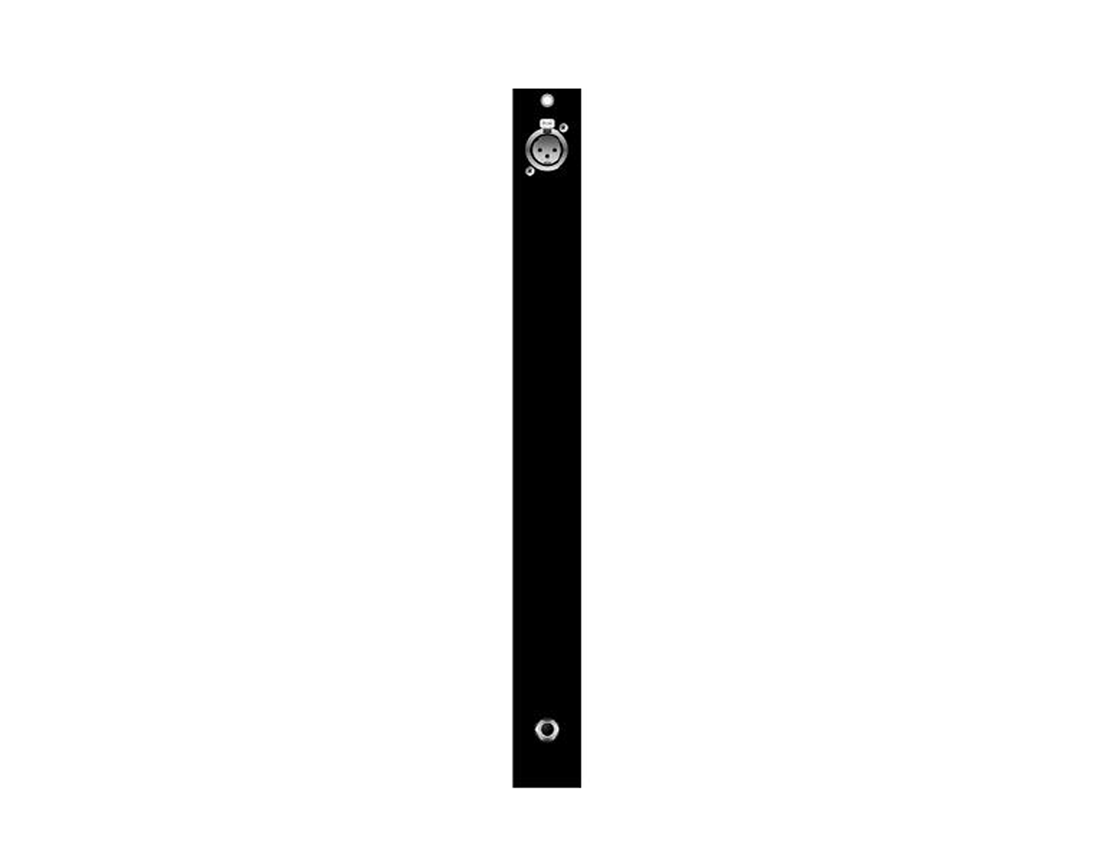 Mic In / Headphone Out Module

The Quasar Mic in/HP out Module is an optional 1ch-wide module that can be placed anywhere on the surface to add a convenient Talkback Input and headphone Output to your Quasar. It comes with its own headphone amp board that must be plugged into the Quasar Rear I/O module, to let the console receive any line signal and turn it into a high-quality, hi-power headphone output.

Our TelosCare PLUS Customer Care program gives you the one-stop service and support you need long after the sale, going far beyond basic support and troubleshooting.

Let our experts help you create the Quasar Family solution that is perfect for your workflow.